Bachelorette parties in Nashville are SO 2019. No hate to Nashville; it’s an incredible city, and I highly recommend that you go there and create havoc on a pedal tavern tour. BUT, there’s another town in the wild, wild west that gives music city a run for its money as a unique bachelorette party destination: Jackson Hole, Wyoming.

Before you come at me, hear me out. This was not MY bachelorette party, but my friend is a lover of nature and an explorer of National Parks, and after the COVID lockdown, she decided that somewhere with open space and fresh, mountain air would be ideal. I will admit, I was highly skeptical. Ahead of the trip, we received an itinerary that had “6am – Leave to go hiking” on it more than one time. Put mildly, I value my sleep dearly, my friends. But as a matter of girl friend-ly duty, I was going to suck it up and experience this trip as the bride wanted it.

Jackson has it’s own airport, conveniently located right in Grand Teton National Park. It’s a truly magnificent sight to see the Tetons from above as you make your descent. Jackson airport gets bonus points for having an antler arch as an entry point from the tarmac to the terminal (they use antlers in all of their decorating — extra points if you get that reference.)

The “Cabin” that we rented was located at The Aspens, which is located slightly outside of Jackson near the legendary Teton Village Ski Resort. It had 3 bedrooms in the main house, a loft in the guest house, the most massive picnic table I’ve ever seen, and a view of the eponymous aspen trees directly from the shower. Everything was made of log beams and stone. There were also several wood burning fireplaces, and, importantly, a hot tub.

Accommodations-wise, this place was an ideal bachelorette party command center. We quickly filled up the kitchen with food and booze before heading out to dinner at Calico Restaurant right down the road. The food was delicious, and the porch where we were seated had the loveliest hanging flower baskets. They have a nice selection of wine and cocktails as well, which no bachelorette party is complete without. We took it relatively easy, though, due to the aforementioned zero-dark-thirty hike the next morning.

For you outdoorsy types, Jackson Hole, the Grand Tetons, and nearby Yellowstone National Park are literal playgrounds. There are hiking trails, horseback riding trails, boating and kayaking options, mountain biking paths, and even a mountain coaster. As a less outdoorsy person, I was a touch nervous about what to expect when we set out for our pre-dawn trek around Jenny Lake. The bride was concerned about the trail getting busy since it’s a pretty popular hike, but when we arrived at 7ish, there were only a few cars in the lot. Walking up to the trailhead and seeing the Tetons lit by the pinkish glow was honestly magnificent. It almost didn’t look real. 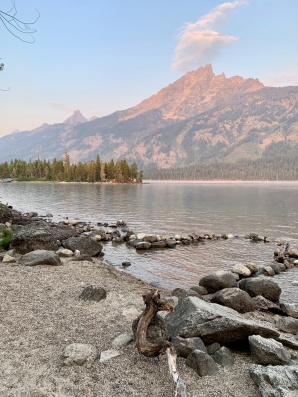 We hiked counter-clockwise around the lake, and I highly recommend you do the same. It’s a longer hike to get to the boat dock heading in this direction (did I mention there’s a ferry that can take you across Jenny Lake if you want a shortcut to the Hidden Waterfall?), but we had to share the trail with nearly no one for several miles. About 3 miles into the hike, we spotted a mama bear and two cubs. Armed with several cans of bearspray and one friend who is a literal Park Ranger, I was only moderately terrified of being mauled. But Mama Bear and Cubs stayed as far from us as we did from them. I did see them climbing a tree, though. Did you know bears really do that? It was wild.

The hike just got more interesting after the bear event, though. We happened upon a cute couple who asked for a picture. Turns out, the guy was about to propose, so now they have a video of their engagement with 6 screeching women and 1 woman repeatedly asking if they, too, saw the bears. Congratulations, you two, if you’re out there reading this! 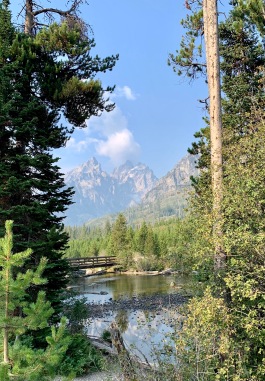 A few of us ended up taking the ferry back across the lake for various reasons, not least of which was wanting to preserve our legs and feet for further hiking. The boat ride is very quick (read: less than 10 minutes) and costs $10 one way, or $18 round trip. It definitely gives you a unique view of the lake and surrounding mountains, and taking it in no way lessens your Jenny Lake experience.

Having survived the hike, we returned to the house for day drinking and vegging out. Another adventure was scheduled for early the following morning: Horseback riding at Turpin Meadow Ranch. Friends, I will be honest. I’m not entirely sure what I was expecting, but it was more “Hey Dude” summer camp vibes than the luxury experience we were treated to at Turpin Meadow. It is absolutely gorgeous, the staff is super friendly, and the food at the restaurant is outstanding. I had what might have been the best steak sandwich of my life for lunch, and washed it down with some delicious craft cocktails.

Trail rides are offered during the summer season in either 2 or 4 hour increments. We had some former equestrians in our group and opted for the longer session. Myself not being a rider, I strongly recommend that you engage in some light stretching before embarking on your horseback journey. Your hips and knees will thank you. And if you’re lucky, you will get paired with Raisin, a chubby little horse with some of the most impressive flatulence I’ve ever heard.

After our trail ride excursion, we once again returned to the cabin for an afternoon of, you guessed it, cocktails and hot tubbing. Later that evening we put together a massive charcuterie and did a blind champagne tasting. We purchased 5-6 bottles of bubbly from varying price ranges. One of the gals poured the samples while the rest of us sipped what was handed to us and made notes about how much we liked it and how expensive we thought it was. Turns out, I enjoy cheap champagne more than the real stuff. Who’d have thunk? But anyway, a champagne tasting is a great little bachelorette activity, especially if you have a Chambong (and you really should have a Chambong).

On day three, we finally had a leisurely wake up. After enjoying some breakfast, we headed out to do some shopping in downtown Jackson, which is absolutely adorable. There are tons of shops, ranging from art galleries (this one was my favorite) and expensive boutiques like Pendleton, to jewelry shops with handmade Native American pieces, to your standard tourist trap shops with all the moose paraphernalia you could ever want.

There are tons of fun restaurants and bars in downtown Jackson as well. We had lunch at Bin22, which does double duty as a restaurant and a wine shop. Right down the street is the infamous Million Dollar Cowboy Bar, where you can perch on an authentic saddle whilst you quench your thirst. If you’re looking for somewhere to nurse the hangover you acquire on those saddle stools, I highly recommend Persephone Bakery for delicious breakfast sandwiches and strong coffee.

Are you sold on having your last fling before the ring in Jackson yet? If not, that’s fine, but you really SHOULD plan to visit if you ever get a chance. The Grand Tetons are spectacular and almost otherworldly from certain vantage points. Leave a comment below if you have been to Jackson, and if you have more suggestions of things to do and places to go!